Stress Relief – how Reflexology can help 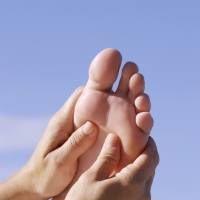 Described as a 21st century plague, it is estimated that 70% of ill health has stress as the root cause.

Reflexology, when used for stress relief, can provide many benefits, and is used to invoke the body’s natural healing abilities.

When under stress, your system responds by releasing a flood of hormones such as Adrenaline and Cortisol.  These hormones rouse the body for emergency action by increasing the heart rate, which in turn circulates more blood to the muscles, brain and lungs. This ‘fight or flight’ response is what is needed if we are faced with a physical threat and we need to react quickly (such as running away from an attacker).

Most stress today is caused by psychological stimuli rather than physical danger. The body cannot distinguish between physical and psychological threat, and reacts to both situations in the same way.  In this situation, stress stops being helpful and can have adverse effects on your health.

Psychological stress can be caused by many things such as an exhausting work schedule, a rocky relationship, in fact anything that puts high demands on us (this can include positive influences such as buying a house, getting a promotion at work or going to university).  What affects one person may not affect another in the same way, so we can, to some degree, learn to manage our stress levels or find ways in which to cope.

Reflexology can help with reducing the effect stress has on you by putting the body in a state of complete relaxation.  In this state muscular tension is released, nerve function improved, blood and lymph circulate freely and overall health and wellbeing improve.  Sleep improves with treatment, and the whole ‘fight or flight’ stress response is calmed.

Many people use Reflexology to help cope with the long term effects of stress. Rather than turning to medication, which can mask symptoms rather than deal with the underlying condition, Reflexology encourages the body to relax and restores natural balance.

Latest from our blog...

Scar Work is a specialised massage technique whose purpose is to improve the function, appearance and feel of scarred tissue and underlying structures Why would

Now that Covid safety restrictions have eased we are simply asking that all patients attending appointments feel fully well in themselves or take a lateral flow test (and test negative) before coming into the clinic.

If you have any doubts over your health we are happy to rearrange your appointment. We really appreciate 24 hours notice of this if at all possible.

In addition, we ask that (especially in busy periods) you continue to wear a face covering in the public areas of the clinic.

Thank you for continuing to help us protect our team and more vulnerable patients so that we can continue to look after you all.